WAS THE PRIME MINISTER ENGAGING IN BULK CASH SMUGGLING ? 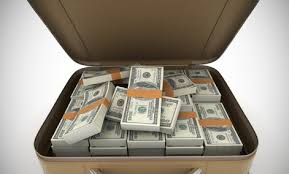 Roosevelt Skerrit, the Prime Minister of the Commonwealth of Dominica, has recently taken two quick trips to the Dutch/French Island of St. Maarten, with first, a senior banker from Dominica AID Bank, and second, the manager of the country's Citizenship by Investment (CBI) program. Individuals who were on the aircraft reported that the travelers left their suitcases behind in St. Maarten.

Were they engaged in bulk cash smuggling of cash received in the opaque diplomatic passport program ? we cannot say, but all the evidence points to such a conclusion. Dominican banks reportedly have refused to accept even CBI funds, unless the actual due diligence report on the applicants is also furnished with the funds. Some reports from Dominica say that clients have been contacted, to come into the banks and withdraw the funds, in full. Other sources assert that some new payments were made in cash, and has been stored by the Skerrit government, while an acceptable depository is found, outside of Dominica.

North American regulators as well as bank compliance officers, are not going to look favorably on this information, especially since no legitimate governmental reason has been advanced for these two trips to a European overseas territory, and the manner in which the trips were undertaken lend themselves to the assumption that they were for private reasons. International travelers know that St. Maarten, a duty-free jurisdiction, does not inspect arriving travelers, or their bags & baggage, and there are a number of local, as well as international, banks, located there.

The arrest of five foreign nationals, from different jurisdictions, who all held Dominican diplomatic passports, but had no diplomatic postings, nor assignments, nor responsibilities to the government, has resulted in a national scandal over the diplomatic passport program, and a demand for the names of all participants, an an accounting of all funds received. An estimated $50m is unaccounted for, and whether some of these funds were in those now missing suitcases is a question that deserves an answer from the Government of Dominica.