WILL REZA ZARRAB PLEAD OUT, AND NAME OTHER CONSPIRATORS ? 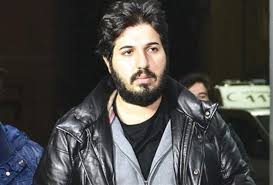 Media in Turkey, where the Iranian-Turkish gold trader Reza Zarrab moved massive quantities of sanctioned Iranian oil, have expressed glee at the news of the firing of Preet Bharara, the United States Attorney for the Southern District of New York, the head prosecutor in the Zarrab case, for they believe that Bharara was intent upon taking the case to trial, which could result in a conviction, and a Draconian sentence for the defendant.

Turkish journalists now opine that, with a successor, appointed by the new American President, a plea agreement is a more likely outcome, which would hopefully result in a far shorter sentence than 75 years, which is the current estimated maximum that Zarrab could receive. He is reportedly held in high esteem by the Turkish public.

Unfortunately, these Middle Eastern media sources overlook the sad reality that a plea agreement would obligate Zarrab to identify other participants in Iran's billion dollar oil sanctions evasion program, and probably testify against them at their trials. while the other conspirators, such as Babak Zanjani, and Alireza Monfared, are likely to be indicted, based upon any cooperation rendered by Zarrab, there are others not known to the public, who might be named.

In addition to the other Iranian nationals who assisted Zarrab, Zanjani & Monfared, any serious prosecution might name West Indians who facilitated the Iran sanctions evasion operation, by granting Monfared a Dominican diplomatic passport, and assisting him in his global oil sales, and money laundering, scheme. Could Dominica's Prime Minister, Roosevelt Skerrit, and his two principal attorneys, be indicted for their roles in assisting Monfared to acquire a Dominican passport, and to move criminal proceeds ? Its is indeed possible.  If such individuals are indicted, that information will remain sealed, until they enter the jurisdiction of the United States, or are extradited, and we therefore may not know that information until arrests are actually made. Will Dominicans be brought to justice for their participation with Monfared in sanctions evasion money laundering ? We cannot say at this point, but we will be watching.

If Zarrab decides to cooperate, the first sign will be a change of plea hearing; after conviction, his sentence may get reduced, with no publicity or fanfare, a year or more after his very public sentencing. We will continue to monitor the case as it unfolds.
Posted by Kenneth Rijock at Monday, March 20, 2017