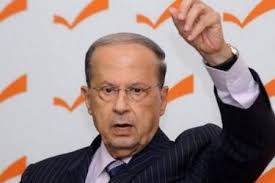 The newly-installed president of Lebanon, Michel Aoun, has wasted no time banging the war drums against Israel. He  is spouting the same propaganda, about the Shebaa Farms area of Syria, now annexed by Israel, that his sponsor, Hezbollah, has been using as a bogus reason for war for decades.

The problem for Lebanon is:

(1) Historical records, the United Nations, and maps of the era, all show that the Shebaa Farms region was part of Syria, who had possession, when the 1967  six-day war began. lebanon has no bona fide claim.

(2) Israel has bluntly warned Lebanon that, in the event there is a Third Lebanese War, it intends to hold the entire country responsible, and destroy infrastructure, not just the Hezbollah-controlled areas. This means that the country's prize, the  downtown Beirut banking center, is at risk. Its loss, even on a temporary basis, could so damage the nation's international financial hub, that money will flow elsewhere.

Lebanon, without significant tourism,  lack of natural resources and industry, would plunge into a severe depression without Beirut banks. Compliance officers have regarded any new outbreak of war, between Hezbollah & Israel, as a game changer for Lebanon, for Country Risk purposes. Perhaps President Aoun might want to reconsider his warlike posture, if he wants to save his precious banking center from destruction.
Posted by Kenneth Rijock at Tuesday, March 07, 2017