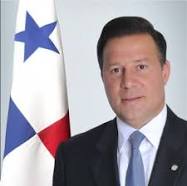 Persistent rumors have been flying around Panama City this week, saying that Panamanian President Juan Carlos Varela intends to pardon a number of former President Ricardo Martinelli's close associates, ex-cabinet members, and possibly even family members, from any criminal charges filed against them, in the massive Norberto Odebrecht SA construction bribery scandal. Varela is often himself listed as a recipient of bribe money, so pardons of suspects in the Odebrecht case may be issued by the president for his own protection.

Martinelli's two grown sons, who were the alleged recipients of millions of dollars which was frozen in their Swiss banks accounts, may evade prosecution, if they are granted pardons. Whether the Panamanian people object to these actions is not known, but most are sick of the widespread corruption, which results in increased costs of everything, as bribe payments are added to the final cost of construction projects.

Is is doubtful that the former president will himself be pardoned;  he faces at least a dozen other criminal cases, pending against him in the capital. The US State Department has studiously ignored Panama's extradition request against Martinelli for months, leading many to believe that he is, or has been, a confidential informant for American law enforcement, or its intelligence services, like his predecessor, General Manuel Noriega.
Posted by Kenneth Rijock at Thursday, March 30, 2017