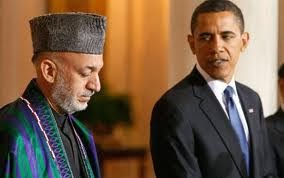 Remarks, made publicly by the President of Afghanistan this week, indicate that unacceptable Afghan demands upon the US, for post-2014 assistance, will kill any possible permanent American military presence after the pullout date, meaning that the Afghan Army will be the sole defenders against a resurgent Taliban, who could regain control of the country.

(1) A specific amount of $ in US Aid agreements, which president Obama cannot guarantee, inasmuch as only the US Congress can authorize aid each year.

(2) A security guarantee against any external threat, such as Pakistan, which the US will not give. There will be no mutual assistance agreement.

(3) No immunity for any post-2014 US or NATO troops who remain in Afghanistan.

This could end like Iraq, with no US port-pullout presence, causing an unstable result. We have previously warned about the widespread corruption, rampant bulk cash smuggling, lack of adherence to the rule of law, and threats posed by opposing tribal rivalries. Add the fact that Afghans will not  have any Western troops on station in 2014, and you have a poor outlook for the long term. The Taliban will not honor the contractual agreements of the present government, should they take over again.

Any investment or extension of credit in Afghanistan, in light of these developments, would be unwise. Raise Country Risk on Afghanistan at this time, and reduce any exposure you have now to zero before the end of next year.
Posted by Kenneth Rijock at Tuesday, October 08, 2013