NORTH KOREAN WEAPONS ON SEIZED SHIP WERE DESTINED FOR THE FARC, AND FOR TERRORIST ATTACK IN VENEZUELA 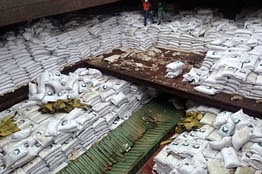 We have all seen the latest update on the North Korean freighter, seized by the Republic of Panama when it attempted to illegally transit the Panama Canal with undeclared military cargo; the weapons and aircraft hidden under tons of sugar were all in operational status, and the MiGs even had fuel in their tanks, but there is much more to the story. Details emerging on the true destination of the missiles, arms, and fighter jets are alarming many in Latin America, though they are curiously absent from mainstream North American and European media.

Here is what was supposed to happen, before some unknown source tipped off the Panamanian Government, which searched, and detained, the North Korean vessel, before it could enter the Panama Canal:

(1) After transiting the Canal, The missiles and small arms were to be offloaded at a clandestine port in Ecuador, close to Colombia. The FARC was then slated to take possession of these arms, and therefore upset the balance of power between its troops and the Colombian Armed Forces, as Colombian military aircraft would thereafter be at risk for missile attack, and several of the FARC Fronts, thus rearmed, would be able to take the offensive once more. Apparently, the peace process, currently under way in Havana, is being conducted by the FARC in bad faith.

(2) The Venezuelan portion of the plan, started by Cuban officials working in the Maduro government, involved publicly releasing fabricated information regarding a planned invasion of Venezuela by Opposition forces. There was no such invasion plan.

(3) The Maduro Government ordered that the MiG fighter jets were to be deployed from a clandestine airstrip in northern Ecuador, reportedly using Cuban pilots, to attack targets in Venezuela's principal cities, and the operation blamed upon the Venezuelan Opposition, former Colombian President Uribe, and several American conservatives who are outspoken critics of the Maduro Government. This fabricated "offensive" would be used as a pretext for the Venezuelan Government to respond violently, arresting or eliminating the entire Opposition leadership, and moving Venezuela closer to an absolute police state, under close Cuban supervision. 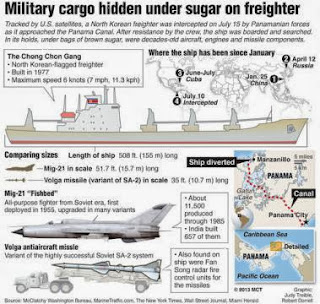 The Cuban general officer who was one of the planners of the operation, Air Force General Pedro Mendiondo Gómez, died shortly after the operation was terminated by the seizure of the North Korean vessel; his death is suspiciously listed as an automobile accident. The North Korean general involved has disappeared, and his whereabouts are unknown.

While this may sound like something from a Tom Clancy novel,  I assure you that there is a factual basis for this information. As a matter of fact, the day that the vessel was seized,  a former Venezuelan Ambassador and security analyst, Thor Halvorssen, who is one of the leaders of Venezuelans in exile, was the first to warn about this operation, and advised that it posed a clear and present danger to both countries. But for Mr. Halvorssen's predictions, and the timely intervention of Panamanian authorities, this plot would have become reality. The Spanish-language version of the Miami Herald covered this case, in an article published on Saturday, substantially after it occurred; no other articles have appeared in the press.

Anyone who believes that the FARC is ready to make peace with Colombia, or who believes that the Maduro Government is anything other than an evil dictatorship, guided by Cuba, should now recognize the ugly reality; the FARC and the Maduro Government want to take their respective countries down a very long road, where there is no light at the end of the tunnel, only darkness.