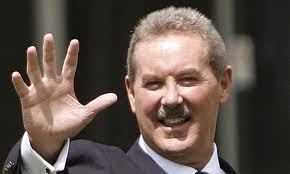 Convicted Ponzi schemer extraordinaire, the former banker, R Allen Stanford, has been granted the right to represent himself in his Fifth Circuit appeal. He asked that his court-appointed counsel be removed, and that he be allowed to proceed Pro Se; Stanford does not have any formal legal education.

The Court gave him six months, until March 18, 2014, to file his initial brief, so don't expect this appeal to be decided anytime soon.
Posted by Kenneth Rijock at Wednesday, October 02, 2013