COLOMBIA SAYS FARC 57 FRONT IS NOW COMMANDED BY A PANAMANIAN 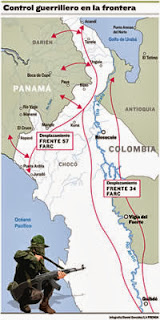 The Ministers of Defense and Security of Colombia, at a news conference, have disclosed that the commander of the FARC 57 Front, which operates in the area of the frontier between Colombia and the Republic of Panama, is a Panamanian national. José Cleogás Mosquera Hurtado, alias "El Pana" is a former member of the Armed Forces of Panama who deserted in 1989, during the American invasion. He was reportedly placed in command of 57 Front after the recent death of its leader in an engagement with the Armed Forces of Colombia.

The FARC 57 Front is notorious in Colombia, in part due to its ongoing tactics of kidnapping civilians for ransom. Hurtado was involved in a number of such kidnappings for profit, as well as participating in FARC operations that resulted in the forced enlistment of children as soldiers. Both of these activities have been condemned as war crimes in Colombia. Hurtado is also accused of narcotics trafficking. The 57 Front, which is believed to number approximately 250 soldiers and support staff, operates on both sides of the border with Panama. Captured communications indicate that it uses Panamanian banks for its financial transactions, which include arms purchases and narcotics sales.