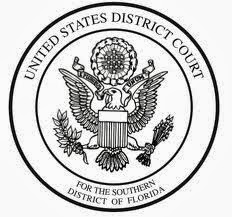 The US District Judge in the Douglas Bates case, which is part of the billion dollar Scott Rothstein Ponzi scheme case in Fort Lauderdale, Florida, has ruled that the Magistrate was correct in restricting Bates from the practice of law, as a special condition of his bond. Bates is scheduled to go to trial in November, on multiple Wire Fraud charges. The charges accuse him of allowing Rothstein to further the fraud.

The Court, in its Order*, noted that Bates allegedly aid and abetted Scott Rothstein in his Ponzi scheme, and that attorney  Bates' actions directly led to the loss of sixth million dollars. The defendant's attorney had argued that in Bates' workers' compensation and personal injury law practice, he did not handle client funds, and therefore posed no risk to third parties.

There apparently was testimony at the bond hearing "that Mr. Bates (1) sent letters alleging to represent clients here knowingly did not represent (2) lied to individuals about business dealings that did not exist or that he had no involvement in; (3) arranged business meetings with individuals that were provided false information at his behest; and (4) sent opinion letters to individuals regarding business plans that he had no knowledge of." The District Judge found that these activities "squarely implicate the practice of law."