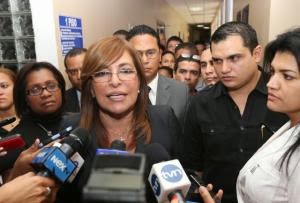 Balbina del Carmen Herrera Arauz, the leader of Panama's Democratic Revolutionary Party (PRD), has been sentenced to three years in prison for revealing the contents of emails that reportedly implicate Panamanian President Ricardo Martinelli Berrocal in the Finmeccanica bribery scandal. Herrera, who is a former candidate for the presidency, released private e-mail messages in Panama's biggest scandal, in which individuals linked to Martinelli reportedly received large kickbacks, to be delivered to the Panamanian President, for government contracts. Whether Martinelli will be charged with corruption in Italy, after he leaves office next year, is one of the more interesting debates in Panamanian politics.

Panama's fatally flawed criminal justice system rarely indicts or convicts the guilty, but Sra. Herrera may have been targeted for a specific purpose. The problem is, it is difficult to ascertain whether she was charged because of the threat that her disclosures posed to Mr. Martinelli, or other factors.

Herrera was the 2009 presidential candidate who received substantial support from the late Hugo Chavez of Venezuela. She professes political views on the extreme left, and her election could have moved Panama into the Venezuela-Ecuador-Nicaragua orbit, and away from the influence of the United States. She has been linked to Hezbollah, as well as to individuals who held power during the Noriega presidency. Do not expect her to cease her opposition to the present government.