Though Spain seems to want to focus global media attention upon its dubious claim to Gibraltar, other events, in Span's leftover colonial possessions in North Africa, serve to remind us that Spain still holds onto several territories that rightly belong to Morocco. Mohammed El Ball, wanted for terrorism by Moroccan authorities, has been captured in the Spanish enclave of Melilla. He was reportedly the leader of two terrorist cells based in Morocco, and had arrived in Melilla from Belgium. Are Spain's North African possessions havens for terrorist operatives ? What about the branch banks in those territories ? 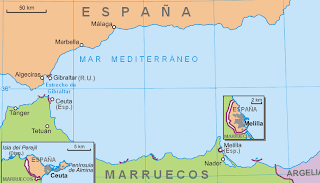 For those who think that Gibraltar is the only disputed territory that Spain has a colorable claim to in the region, those of you who are familiar with Morocco may have heard of Isla de Perejil, or Parsley Island, an uninhabited island which lies just off the coast of Morocco. Spain has long contested legitimate Moroccan territorial rights to Perejil, and few readers outside of Morocco are aware that, to make a point, the island was actually invaded by Spanish troops in 2002, and the Moroccan military cadets removed, and returned to their own country. The Arab League formally protested the action, but the countries of EU supported Spain. 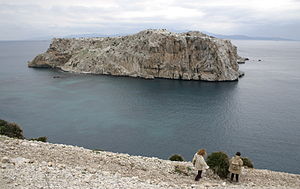 Considering that one could almost throw a rock, from Morocco, and hit the island, it is within Moroccan territorial waters, and its Exclusive Economic Zone. Spain should take care of its own house, its historical colonial baggage, before making waves (no pun intended) over Gibraltar.
Posted by Kenneth Rijock at Thursday, September 05, 2013