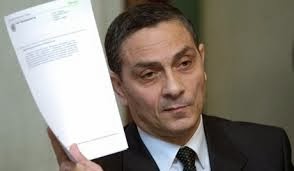 Those who thought that Richard Chichakli would swiftly agree to a plea agreement in his case* now have their answer. The defendant has come out swinging, and filed a handful of defensive motions. Unfortunately, they are not available on PACER, which posts the electronic filings in the case, and it is doubtful that, while in custody, he has the ability to file Pro Se electronically, even with the assistance of his Stand-By Counsel.

Did he type the motions in the MCC law library, or were they holographic documents ? We cannot say, but we were able to deduce the content of the motions from the details in the Government Memorandum in Opposition to Defendant's Pending Motions.

He filed these motions:

(2) A Motion to Strike, seeking to eliminate  all references to sanctions, and to Viktor Bout, as prejudicial and inflammatory. The Government responded that the motion was not supported by the law, and that Chichakli had not cited to any legal authority, in support of his position. Bout is a defendant, but cannot be tried, due to the limitations of the law on Extradition.

(3) A Motion to Suppress, asking that all evidence from the search of the defendant's residence be excluded, because the search warrant affidavit contained false statements. The Government countered that the affidavit was supported by reliable information, and that there was sufficient evidence to support Probable Cause to search his residence.

In addition, the defendant is seeking a prompt hearing on these motions, and that an investigation be conducted, in tampering with the laptop computer issued to him to review the discovery. He alleges that the Bureau of Prisons IT Department improperly accessed his computer logs, removed 165 Gigabytes of information, and denied him access to Microsoft Outlook, by inserting password protection. Apparently, it was the US Attorney's office that was to provide IT service, and Chichakli is call for a report to be filed when these pending motions are heard at oral argument.