HEZBOLLAH FREELY MOVES MONEY THROUGH BANKS IN THE WESTERN HEMISPHERE 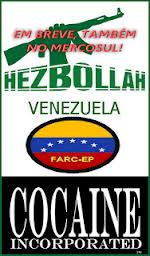 A reader who reviewed yesterday's article asked how extensive the Hezbollah financial pipeline is in the Western Hemisphere, and questioned how a specially designated global terrorist organization had access to major financial institutions. The answer lies in the organization's extensive use of front men, whose ties to terrorist financing are not readily apparent. Unfortunately, the principle of "Know your Customer's Customer" is not widely practiced, and links of a bank customer to terrorist associates, or even known terrorist agents, is not uncovered during routine due diligence.

Where are these Hezbollah-controlled accounts ?

(1) The Republic of Panama, especially in the Panamanian branches or subsidiaries of Venezuelan banks, and in those banks under the management or control of Panama's flourishing Syrian organized crime organization.

Hezbollah accounts in Beirut are the usual recipients of the narco-profits, as specific accounts it controls in Lebanese banks have been identified by investigators in Caracas.

How are these accounts operated ? Funds emanate from accounts in most of Caracas' major banks, as well as the bulk cash smuggling route discussed in yesterday's article. From there, they generally go to Panama. How they arrive in the United States can only be ascertained through a review of the active and closed accounts that are known.

I also count thirty eight corporations controlled by Hezbollah, and more than two dozen properties that it appears to own through front men. While I have been concentrating on accounts owned by individuals, a search for accounts in the names of those front companies, at the banks already known as Hezbollah clients, would be necessary.

This is just the tip of the Hezbollah financial iceberg. I can understand why the Caracas accounts are totally untouchable, given the Venezuelan Government's known relationship with Hezbollah, but the unimpeded flow of cocaine profits through accounts in Panama, the United States, and other countries in the region, is simply unacceptable.