PERUVIAN COUNTERFEITERS OF US $100 NOTE FLOURISH 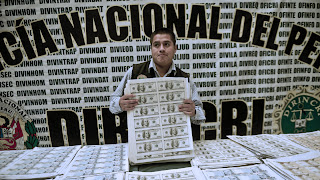 The United States Secret Service, which has jurisdiction over counterfeit American currency, has warned that state-of-the-art bogus one hundred dollar bills, and Euros, are being made in Peru by skillful criminal craftsmen. The figure officially quoted is $103m, in Peruvian-made counterfeits,  that have been seized in the past ten years.

Though the notes are good copies, most will fail the test of currency scanners, as they are generally made on bond paper, not the special content paper (75% cotton, 25% linen) employed by the US Department of Printing & Engraving.

Inasmuch as US Dollars are most in demand in hard currency-starved Venezuela, whose own bolivars are slowly self-destructing, I would be checking every USD$100 note that is being deposited in American accounts, on behalf of Venezuelan nationals. I would also note that the relatively easy cross-border transport of the counterfeits means that you will want to check $100s coming from Colombia, Argentina, and Ecuador, as well.

Remember, the paper is the key to the identification of the bogus notes.