HEED WELL THE WARNINGS FROM THE BO XILAI SENTENCE 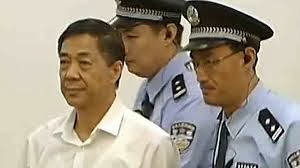 The quasi-public nature of the corruption proceedings in the case of Bo Xilai provides us with helpful hints regarding exactly how foreigners should conduct their business relationships in China. The case should also serve as a warning about what not to do, if you value your company's investment there, and your own freedom, should you choose to work there.

(1) Bo Xilai was sentenced to life in prison, and forfeiture of all his assets. I wonder, does that include his three million Euro villa in France ? Violating the FCPA, the Bribery Act, or any other nation's corruption laws, get you arrested at home, or in China, and their prisons are not for the weak of heart.

(2) Who gave the defendant all those greenbacks, the tens of thousands of dollars in US currency that his wife used to draw upon from the family safe, when she wanted to go on a shopping spree ? Someone here just made it easier to build an FCPA violations case on the donors. Who was guilty of such stupidity ? Or was it simply arrogance ?

(3) The reported four million dollars held by Bo Xilai; some came from government funds. If you are holding hands with a corrupt PEP, or your local partner is, you run the risk of being tarred with his crimes in China.

(4) Bo Xilai stated that an official Chinese government agency at first sought to cover up his wife's crime by filing bogus reports. In China, the truth is what the Chinese Communist Party says it is. Don't get on the wrong side of the official version.

(5) The extremely public attention paid to the trial means that the government is serious about stopping blatant corruption, or is it just those who are politically incorrect ? Can you really say you understand the permutations of Chinese domestic party politics ?

(6) Will all foreign consultants now be under the microscope ? Assume this to be the case.

This is all about political astuteness, in an inscrutable country. choose your Chinese partners, and Godfathers, wisely.
Posted by Kenneth Rijock at Sunday, September 22, 2013