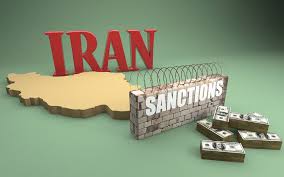 It seems that the honeymoon most Iran observers were enjoying, after a "moderate" was elected president, is over far too soon. The United Nations Iran Sanctions Committee has reported that it is continuing to learn of new sanctions breaches, and of renewed efforts to covertly import prohibited items. All this has happened after the so-called moderate was installed in office. Somewhere in Tehran, they are laughing at the West for its naiveté, I promise you. The religious leaders run Iran, not the politicians, and they obviously want to have the Bomb.

Add to this mix the new online status reported on one thousand centrifuges, and it is business as usual in the Islamic Republic. The sanctions, while they hurt the man in the street, are by and large ineffective on the government. Financial transactions are routed through third countries, whether they be in the Middle East, the former Soviet Republics of Central Asia, or East Asia, where only lip service is paid to  UN sanctions. American banks are indirectly issuing credit cards to Iranian nationals, by shipping the cards to third countries, who promptly issue them on their behalf. Some Iranians find it less than amusing that they are being gouged by US banks, but they do get their MasterCards and VisaCards.

Words to the wise:

(1) Do not let your guard down on bank clients engaged in international transactions involving dual-use goods.
(2) Watch for payments for  unusual shipments of foodstuffs headed for a country where it is doubtful that the items will be consumed there. Iran is known to pay a huge premium for illicit food transactions.
(3) Iranians continue to seek to acquire immigrant investor status, where it is available, and also economic citizenships in those countries who wish to sell them to clients, irrespective of Source of Funds. Where was your new affluent St. Kitts client born, I ask ?  Tehran ?
(4) Iran continues its covert program of investment in real estate projects in the West, using front men who have a degree of local political clout. Who are the architects and accountants of the commercial real estate projects you are banking ? How long have they been practicing in your community ? Who are the investors ?
(5) Watch for transactions in and out of the lesser known UAE jurisdictions, those other that Dubai and Abu Dhabi. Does the volume of goods exceed the ability of that emirate to consume it in a reasonable period of time ?

In short, forget about the sunny predictions of "reform," and continue to be vigilant. You do not want to have your bank's name published on the OFAC "name & shame" list.