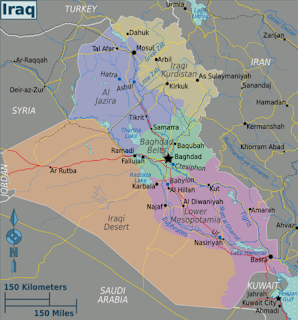 We have previously warned compliance officers to be wary of any significant transactions with Iraq, due to the river of dollars flowing to Iran, from both Baghdad and the Kurdish Region, but several disturbing actions taken by the Iraqi Government this year, in my humble opinion, disqualify Iraq for client investment, or for any other financial intercourse. The risk of loss, or of default, or of major domestic problems, is just too high at this time; it is like a ticking time bomb, waiting to go off.

(1) The Government of Iraq has, more or less, violated all nineteen points of the Erbil Agreement, which served to level the playing field for Sunni and Kurdish groups.

(2) The de facto  alliance with Iran.

(3) Iraq's failure to condemn the war crimes of the Assad regime in Syria.

(4) Allowing Iranian aircraft to overfly Iraqi airspace, carrying troops and arms to Syria, and lying to the United States about it.

(5) Tacitly ignoring the attack on the MEK camp. I am no friend of the MEK, but that was just plain assassination.

(6) Stating publicly that it will assist Iran to develop its nuclear program.

(7) Storing Syrian chemical weapons, to keep them out of the reach of UN inspectors.

If your bank is continuing to have exposure, due to dealing with Iran, its banks, or its businesses, you are taking a tremendous risk that things will ultimately result in a substantial loss.