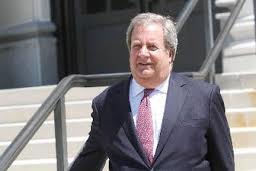 The Supreme Judicial Court of Massachusetts has advised the parties that it will schedule oral argument during the month of October in the Massachusetts Bar's appeal of the three-year suspension handed down to attorney Michael W Burnbaum. The bar wanted the suspension to at least match the five-year  punishment imposed by the Florida Bar, when Burnbaum resigned, requesting what is known as Reciprocal Discipline. If the Court applies the rules applicable to resignations, the minimum time for a suspension appears to be eight years in Massachusetts.

The case is of great public interest because Burnbaum, a criminal defense attorney (and former United States Attorney)  was sentenced to 105 months,  after he was convicted, in a cocaine distribution case in Florida. He never notified Massachusetts of his conviction and incarceration, and of the Florida Bar discipline, and apparently set himself up as a lawyer in New Jersey, where he was not admitted to practice, after his release. Should a felon practice law, and can he ?

During his representation in US District Court in New York, last year, of a criminal defendant, Nathan Rothschild, his history became known, and Massachusetts then brought an action to suspend his law license. In his application to practice in federal Court in new York, he had coyly attested to the fact that he had no pending disciplinary proceedings, but as an officer of the court, was he not duty bound to disclose the fact that he could no longer practice in Florida, and that he had a felony drug conviction ?

Add to this more recent media attention of this individual, where it is claimed that he was an unindicted conspirator, labeled "MB," in an indictment,  in a Federal criminal case in New Jersey. Is he practicing law without a license in the State of New Jersey ? It certainly looks like he was giving legal advice to clients.

Both sides have filed briefs in the appeal. We shall advise you when the opinion is published.
Posted by Kenneth Rijock at Tuesday, September 10, 2013