WHY IS FIFA EXECUTIVE/MONEY LAUNDERER STILL NOT SENTENCED AFTER THREE YEARS ? 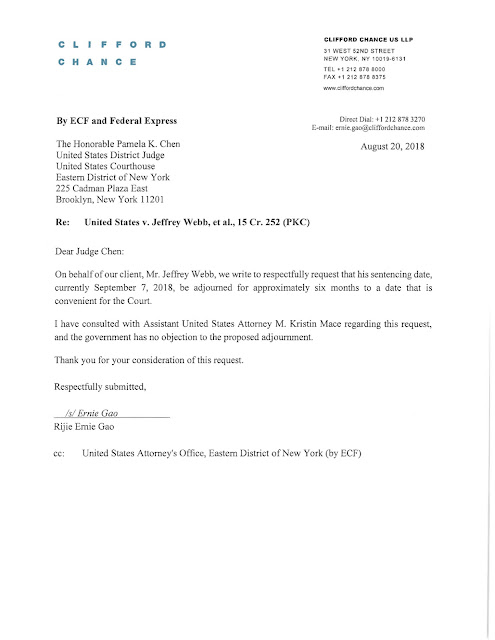 I do not know what sort of plea deal former FIFA official (and Cayman Islands football leader) made with Federal prosecutors, but the landmark corruption trial of his co-defendants was over ten months ago, and I cannot see a reason why the three years he has been under house arrest (Home Confinement) need to go on. He should be sentenced for the crimes he pled guilty to, which include money laundering.

Instead, his attorney strangely asks for and receives a further (8th) delay in his sentencing, apparently to March, 2019. We see that the US Attorney has no objection to this long delay, and wonder why. Who asks for six months, without specifying the grounds or reason therefor, and gets it ? I note that the usual boilerplate "for the ends of justice" was missing from the motion.

Whether Webb, who has been enjoying his relative freedom while the other FIFA executives who accepted bribes from businessmen seeking to profit from football's free-spending fans are in prison, is working on some new case is not known, but a flat six month delay in sentencing is an indication that either something major is in the works, or Mr. Webb has learned to work the criminal justice system extremely well. Which is it ?
Posted by Kenneth Rijock at Wednesday, October 24, 2018