DOMINICA HAD PHOTO OF MONFARED, YET CHOSE TO PUT DRAWING ON HIS DIPLOMATIC PASSPORT TO CONFUSE FACIAL RECOGNITION SOFTWARE IDENTIFICATION 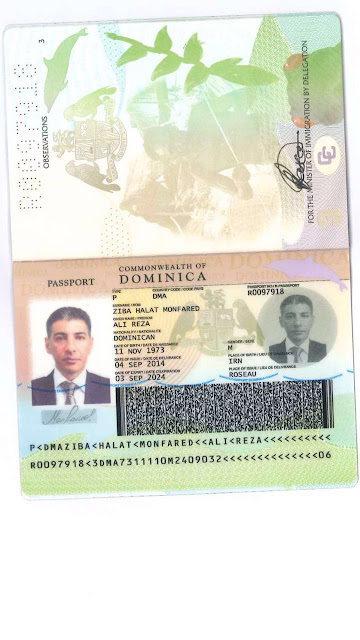 Our recent article, Is this Dominica Diplomatic Passport Image an effort to Defeat Facial Recognition Software ? showed how the Commonealth of Dominica had resorted to a sketch, or drawing, of the dodgy Iranian sanctions evader, Alireza Monfared, on his diplomatic passport, rather than a photograph, in an apparent attempt to foil facial recognition software platforms.

For those readers who might have thought Dominica used the drawing because they had no photograph on hand, take a close look at Monfared's CBI passport. Yes, he has two passports issued by Dominica, one CBI, and one diplomatic. Please note that the CBI passport features a photograph. Why didn't Dominica attach that photo to his diplomatic passport ? Because it intended to confuse and mislead any facial recognition software program that accessed Monfared's diplomatic passport, when he presented it, upon arrival abroad, or when such a program compared CCTV, newsreel  or other footage, to his passport image.
Posted by Kenneth Rijock at Thursday, October 18, 2018