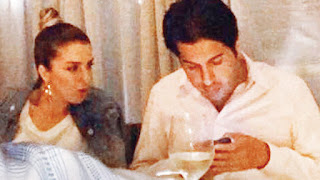 Reza Zarrab, the Iranian "oil-for-gold" sanctions evader, who, with his partners Alireza Monfared and Babak Zanjani, orchestrated a $9bn operation that covertly sold Iranian petroleum around the world, and who pled out before trial in US District Court in New York, was recently seen by journalists, at Nobu in Manhatten. Notably, he was neither in custody, nor being escorted by FBI agents, which is puzzling, being that he faces substantial prison time. Photographers captured him with a female companion; his trademark beard is gone. Zarrab has not yet been sentenced, nor has a sentencing date been scheduled. They left in a Cadillac Escalade. It is not known whether his driver was also a bodyguard.

His complete freedom, with only a driver to acceompany him and his date, might indicate that his level of cooperation is extraordinary in scope. There are a number of other probable targets in the New York case, and one should assume that the billions of dollars diverted by Zarrab and his partners are also of interest to the United States, for seizure and forfeiture.

Legal observers believe that the  targets of the investigation include:

(1)  Financial professionals in Malaysia's obscure tax haven, Labuan, who moved the proceeds of sales. Oil tankers often anchored nearby, storing unsold product in the harbor of the offshore financial center.
(2)  Government officials and lawyers in the Commonwealth of Dominica, who sold the partners CBI and diplomatic passports, laundered the proceeds of crime, and registered the oil tankers in Dominica.

Obviously, there will be additional indictments handed down in this case, ands we will be monitoring the docket, reporting back on all developments as they occur.