WHICH US BANKS ARE SUPPLYING US CURRENCY, INDIRECTLY, TO PALESTINE ? 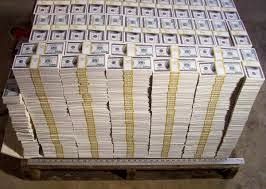 A number of reliable witnesses have seen full pallets of brand new shrink-wrapped US currency, being unloaded from a container, in the Palestinian Territories. Where on earth did these new greenbacks, fresh from the United States Mint, come from, I ask ? Which US banks are involved ?

Obviously, the pallets first are shipped, intact, from a major American financial institution to a correspondent bank in the Middle East. My educated guess is Turkey or the UAE, though Qatar comes up as the principal financier of Hamas. One wonders what these Middle Eastern banks tell their opposite numbers in America, as to exactly why they need all this US currency, and how the reasons for the shipment are documented by the banks' compliance divisions. Is the profit so lucrative that the greedy US banks ignore the reality that the probable end users are most likely sanctioned entities, individuals, or jurisdictions.

The idea that the latest series of US $100 notes are being distributed to in Gaza, to Hamas officials is bad enough, but I cannot accept the fact that US bankers actually facilitated this act, which is the provision of material support to a specially designated terrorist organization, on way or the other.