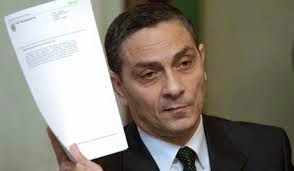 In a letter relayed to the Court by his attorney Mitchell Dinnerstein, and in further support of his Rule 33 Motion for a new trial, Richard Chichakli has asserted that the United States Attorney's office in New York suborned the perjury of a critical witness in his case, Henry Gayer. Chichakli has a pending motion before the Court, and he has supplemented it with this information, which he says was not given to him in discovery.

The defendant says there is a seven-page email that allegedly evidences a nonexistent transaction between the parties, involving Indonesia, where Mr. Gayer lied about a 2006 sale to one Kimal Investments Ktd., a transfer that Gayer allegedly said occurred to evade OFAC sanctions. The witness denied that the transaction occurred, when asked about it at trial.

The thrust of the defendant's argument is that the US Government surely had possession of this document, which he says would have been an effective challenge to Gayer's credibility, but which was withheld for the discovery delivered by the US Attorney's office. Chichakli alleges that the US Attorney in Manhattan, and the two AUSAs handling the case, "are all aware of the perjured testimony. They deliberately allowed and suborned the perjury, more likely encouraged it, and conspired to conceal the facts. "

Post-trial motions remain pending in the case, as does the Court ruling upon the defendant's competency to assist in his own defense.
Posted by Kenneth Rijock at Sunday, August 03, 2014