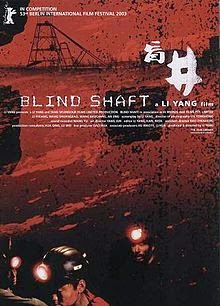 It was bound to happen; Chinese filmgoers see an award-winning motion picture, depicting con artists perpetrating a coal mine accident scam, and collecting damages, and seek to imitate the movie in real life. A controversial 2003 Chinese film. "Blind Shaft," provided the inspiration for true-to-life perpetrators, but the end result was the imposition of death sentences for five of the defendants, handed down by Handan City Intermediate Peoples' Court.

The way the scam worked: four migrant workers were enlisted, to serve as coal miners in North China; they were thereafter murdered, through blows from a hammer, by the fraudsters, who then claimed that they had died in a mine accident, and that they were the surviving relatives of the victims. Reports state that the scammers collected the equivalent of $290,000 from mine owners, before being caught. One wonders why the mine owners did not conduct due diligence, to confirm that the claimants were truly close blood relatives of those who died, and whether proper autopsies were conducted, to confirm cause of death.

Five of the fraudsters received death sentences; the remainder, twenty-one individuals, will serve prison terms of up to fifteen years. The most disturbing fact to emerge from the case is that there have been other similar copycat crimes in China, since the film was released. Perhaps miners in China should govern themselves accordingly.