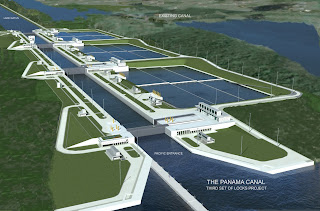 The consortium of companies that is expanding the capacity of the locks of the Panama Canal has given the government of the Republic a 21-day notice, requiring it to address payment of the $1.6bn cost overrun. Failure to receive these funds, which are due to the group of three construction firms, will result in a total stoppage of the project, which is already one year behind schedule, and will not be ready until June 2015, at the earliest. The Government of Panama has denied that it is in default, and stated that it will not be intimidated into payment.

In addition, it has been reported that Panama does not have the financial capability to make the scheduled February 2014 payment. The canal expansion project could grind to a halt this month.

If the canal expansion project is not completed, it will not have the ability to handle increased shipping, as well as larger vessels that presently cannot transit the locks. It is believed that Panama's President Ricardo Martinelli is counting upon the increased revenue that will be generated by the new locks, and that he has factored in that cash flow to government spending in 2014 and 2015. There may be severe
economic consequences for Panama if the Canal project is further delayed, or cancelled altogether, and this should be monitored by compliance officers whose banks, or clients, have potential investment exposure, for Country Risk purposes.
Posted by Kenneth Rijock at Thursday, January 02, 2014