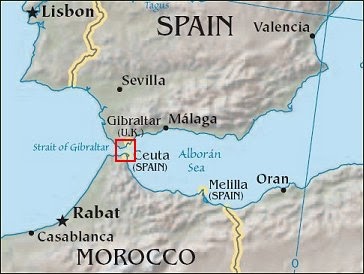 Foreign Office documents declassified after thirty years indicate that the King of Spain advised the British Ambassador in 1983 that Spain did not really desire sovereignty over Gibraltar. King Juan Carlos admitted, to the British Ambassador to Spain, that it was not really in Spain's interest to regain Gibraltar after 300 years, because it would cause Morocco to immediately renew its demand that Spain turn over its North African enclaves and territories, including Ceuta and Melilla. Those small remnants of Spain's colonial past are occupied by Spanish nationals, and Spain dearly wants to retain possession.

Though this appears to directly contradict recent Spanish actions concerning its claims over Gibraltar, if the actual Spanish position on Gibraltar is that regaining control is not in the Spanish national interest, then one must conclude that Spanish posturing over Gibraltar is solely for its domestic audience, for political purposes. In a country where unemployment is hovering around twenty-five percent,  an appeal to patriotism serves to distract the Spanish population from the country's economic woes.

Since Spain's noise over Gibraltar appears to be only that, and thus the threat of any action to occupy Gibraltar is non-existent, Country Risk for Gibraltar can now be reduced to those low levels that were in place before the troubles.