NEW US ARRIVAL KIOSKS FOR CITIZENS SPEED ENTRY, AND DOCUMENT IDENTITY THROUGH PHOTOGRAPHS 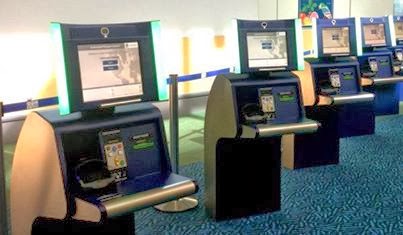 If you are a US citizen, and have returned from a vacation outside America recently, you have probably been exposed to the new arrival kiosks in use, which scan your passport, and spit out a clearance receipt in a far shorter time than before. Once you have the clearance, you can exit CBP Immigration without ever having to wait on a long line for an agent to punch in your passport number, wait for the result, read them, and stamp your passport.

The only additional feature: your photograph is taken, and a copy is attached to the passport page photo, for the benefit of the CBP agent at the exit. I have often wondered how they deal with the fact that individuals change their hair styles, and hair color, and also, regrettably, age during the decade that a passport is valid. Now the current appearance can be compared to the passport photo, by the agent. It may also aid in identifying, and detaining, individuals who attempt to enter the US with the document of another.

Of course, you know that the civil liberties advocates will be pointing to the new photo procedure, for US citizens, as unwarranted and intrusive, but it could become a valuable tool in law enforcement investigations, in cases where there are no recent photos on individuals who are persons of interest. I also believe that there is no unlawful search or seizure, where the photographs are taken at the functional equivalent of the border, where there are different considerations for obvious reasons.

If this is truly a Constitutional issue, then I  believe that the courts will eventually settle the question in favor of agencies that enforce the law, due to the special circumstances that the border presents, and previous decisions that have held that the border exception trumps the 4th Amendment. There is really no expectation of privacy at the border, nor should there be.
Posted by Kenneth Rijock at Tuesday, January 07, 2014