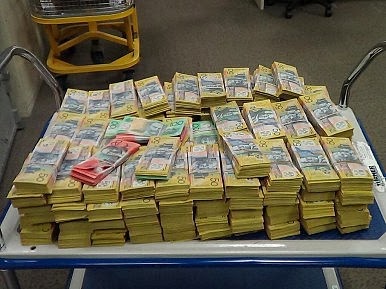 Buried in the information concerning this week's major drug money laundering case in Australia, where a half a billion dollars in assets and drugs was confiscated, and multiple arrests made, was a important detail about Hezbollah; did you miss it ?

The drug money was laundered by being distributed to legitimate recipients of foreign money transfers in Australia, in lieu of the actual funds, which were en route to them; the criminals would then divert the payments to themselves. Coming from legitimate MSB sources, they in effect converted their illegal narco-profits, into legal foreign remittances.

Australian authorities stated that Hezbollah was extorting money from the MSB that was diverting the legitimate payments. It demanded, and received, a portion of "every dollar that it laundered." Think about that for a moment. Hezbollah, which has no part in the drug money laundering, inserts itself into the payment process, much like a taxing authority. The Taliban have this extortion thing down to a science; perhaps Hezbollah to a page out of their playbook.

First of all, we are obviously talking about MSBs in Lebanon;  Hezbollah has the power to coerce payments in any area where it has a military presence to enforce its demands; That means Beirut.

The United States has listed two Lebanese MSBs linked to Hezbollah, and designated them to be of primary concern for money laundering:

Given the influence that Hezbollah exerts over Lebanon, one must assume that it can extort payments from any MSB operating there, and you should act accordingly. Unless and until Lebanon has either disarmed, or defeated, Hezbollah, regard all Lebanese MSBs as probable associates with that terrorist organization, as the level of risk with Lebanese MSBs should be regarded as extremely high.