It can be argued that the European Union is losing its war on money laundering. Between the laundrymen obtaining CBI passports from Malta, Cyprus and the East Caribbean, to the Swiss banks operating their efficient laundromats from a safe haven outside EU jurisdiction, to dirty money from Africa, Asia and the Middle East flowing into the UK, Germany, Austria, and several other EU member countries, things are not improving; Things are actually getting worse.

Perhaps it is time to be proactive. Legitimate businessmen know that successful money laundering raises the prices of real estate, limited supply luxury goods, damages a country's reputation as a known money laundering center, which discourages foreign investment, and taints government officials scorched with the twins of corruption, bribes & kickbacks. Narcotics manufactured in China and smuggled into British Colombia are resulting into Canada's own opioid overdose crisis.

The Canadian Province of British Columbia has directly engaged with its citizens, many of whom are sick and tired of reading about Asian organized crime members (Triads) purchasing large amounts of real estate in their neighborhoods, elevating home prices to where many residents cannot find a reasonably-priced home for purchase. They are laundering the money through casinos, which are not reporting any of the illicit transactions to regulators or law enforcement, and they are also using horse racing  and luxury automobile purchases to clean their drug cash.Known as the "Vancouver Model,"
money laundering in BC is out of control, and has not been suppressed thus far by local law enforcement action. 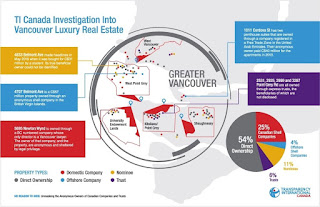 Enter the "Turn-in-a-Money Launderer" program. It allows Canadians to anonymously report suspected money laundering operations, without disclosing their identities if they wish. Using the "Money Laundering Tip Portal, " they can directly pass information along to the Government of British Columbia. It is part of a BC program known as "Get Involved," which encourages local input on several issues, but is handled separately, to protect the informants and their information.

Should the European Union adopt this aggressive program ? Note that the BC program asks only for the methods and modes of operation; it allows the informant to identify the operation without naming the money launderer, though his or her identity can be easily ascertained, given the information supplied. Thus, any EU privacy issues, regarding the names of suspects, are artfully avoided.

Law enforcement agencies, armed with the information, then identify the subject laundryman, quickly obtain his photograph, and then confirm his identity, or expose his true name, using social media resources accessed through facial recognition software systems. They conduct surveillance on the money laundering pipeline, and suppress it through subsequent arrests and seizures of assets.

I am sure the good people of Malta and elsewhere in the European Union, would welcome such a chance to take a bite out of crime. We hope the European Commission will consider taking such action.