AUSTRALIA CASE REMINDS US THAT CUCKOO SMURFING IS ALIVE AND WELL 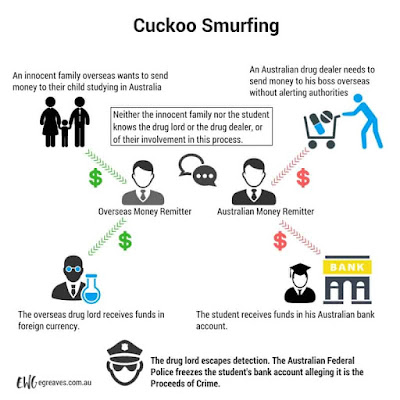 If you are a distributor of narcotics in North America, and you need to repatriate the profits of your employer abroad, the technique known as cuckoo* smurfing is often the method employed to transfer those funds, outside normal financial channels. It occurs when one party has money here, and need it overseas, leaving no record of international transfers, and he is matched up with the second party, who has dirty money abroad, but wishes to have it inside the US or Canada, so that he can launder and/or invest it. The technique came under scrutiny recently in a prominent Australian investigation which is diagrammed in the illustration that appears above.

There are several different permutations and combinations of this technique, but they all involve someone overseas smurfing dirty cash into legitimate banks accounts, giving the first (onshore) party instant access to his assets overseas, without alerting regulators and law enforcement to large transactions.

Some commentators classify this method as a variety of Hawala, while others contend that it is refinement on the Black Market Peso exchange, modified to fit any currency.