Jawad Nasrallah, the son of Secretary-General Hassan Nasrallah, has been named as a Specially Designated Global Terrorist (SDGT), as a foreign national who has committed acts of terrorism that threaten national security and foreign policy. He was sanctioned by the Department of State, pursuant to Executive Order 13224. 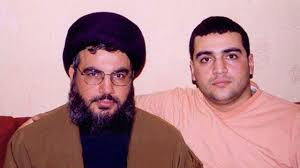 The younger Nasrallah has been responsible for a number of failed terrorist actions in the West Bank.
Posted by Kenneth Rijock at Wednesday, November 14, 2018