The disclosure this week, that the notorious Malaysian fugitive, Jho Lo, has engaged a dream team of American attorneys and public relations firms, who have spent millions trying to shape public opinion regarding their client, and are seeking to air his version of his involvement in the $2.7bn 1Malaysian Development Berhad scandal. The advocates for Jho have gone so far as to file under the Foreign Agents Registration Act (FARA). Obviously, they know they are working in an extremely grey area. One company says their focus is on "Identification and Prevention of possible news threats." I leave it the reader on how you want to interpret that statement.

Litigation communications, which attempts to portray a controversial client in the most favorable light, whether he is a criminal defendant on the run, such as Jho, an accused fraudster who is the subject of massive civil suits, a securities trader accused of serious regulatory violations, or any other high-profile individual whose case is in the courts, due to his abysmal conduct, seeks to mold global public opinion, through indirect but effective activities. They call it "developing a compelling narrative." Zealous advocacy is one thing, but truth sometimes takes a holiday with these narratives. Do not expect objectivity, especially in their social media postings.

Jho, who has been in the news, due as much for his fugitive status, as his potential journey to St Kitts, where his ownership of a CBI passport and citizenship could guarantee him an indefinite safe haven from extradition, appears to have his litigation communications team attempting to convince us that he is innocent, and that he will not be able to get a fair trial. They also are trying to plant the seed of doubt about the legitimacy of the Malaysian court to hear the case, which played out in several countries. I expect that they will play the "purely politically motivated case" card if he is arrested and returned for trial in his native country. 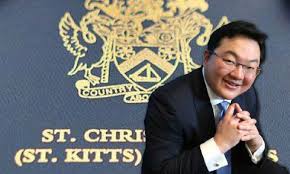 Compliance officers, do not allow yourself to be persuaded by any advanced effort at what is really Reputation Management when applied to a client whose case is pending in criminal court. Rely only upon official sources, such as court and administrative filings by prosecutors and government agencies, trial transcripts and depositions. the next best thing is well-known objective media, which reports facts, based upon observation. Stay away from opinion, counterfeit websites posing as news, self-serving websites, or anything else that could be well-drafted public relations efforts which are masquerading as hard news. Do not allow yourself to be diverted from reliable material by smoke and mirrors.