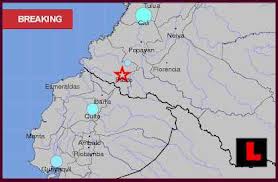 The 6.9 earthquake, that hit southern Colombia this week, was felt in Bogotá, and in parts of Ecuador. There are no known deaths to date, but destruction of homes in 43 villages and towns was widespread in rural Nariño Province. The epicentre was 11 km. from the town of Pesto, and was recorded at a depth of 129 km. underground.

Why is earthquake information appearing on a financial crime blog ? Clever money launderers often take full advantage of the desperate need for relief funds in the affected area to repatriate illicit funds, and Colombia remains a haven for drug cartels, who have earned profits in North America, and want their money returned home. 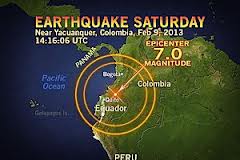 Any new charity appearing now, that attempts to use your bank to transfer what it describes as relief funds should be thoroughly checked out before being allowed to open an account. Do not be persuaded by the stated urgency; verify its nonprofit status, history and funding track record, before approving it for account opening.
Posted by Kenneth Rijock at Monday, February 11, 2013