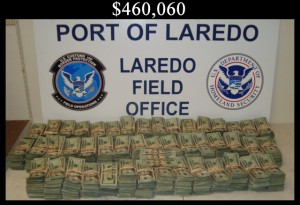 US Customs and Border Protection agents at the Lincoln-Juarez Bridge border crossing, in Laredo, Texas, have detained a US citizen from Chicago attempting to enter Mexico with $460,060, concealed in twenty bundles hidden in his Dodge Ram pickup truck. The individual had failed to declare the currency.

Unlike most large cash seizures made at the frontier, the identity of the detained party was not disclosed, nor was any information released as to whether he was charged with bulk cash smuggling, an offence that carries a maximum Federal sentence of five years, raising the presumption that he is cooperating with the authorities, and his name is being properly withheld so as not to reveal details of an ongoing investigation.
Posted by Kenneth Rijock at Thursday, February 07, 2013