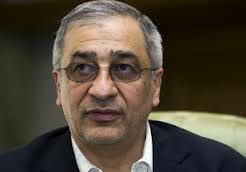 Tahmasb Mazaheri, the former Governor of the Central Bank of Iran who was caught with the infamous three hundred million Bolivar Cheque in Germany, is not just a former senior government official. He is also the director of record of a Venezuelan bank cleverly organised with a name that is deceptively similar to one of the Western Hemisphere's most prominent institutions, the Inter-American Development Bank. That is a classic money laundering tactic, used by yours truly many times. So the question arises, is Mazaheri the kingpin of the Iranian money launderers ?

The Venezuelan-Iranian front bank, which was immediately sanctioned by the United States, does NOT serve the Venezuelan public. It is an obvious facilitator of Iranian sanctions evasion, and money laundering activity. I have seen the corporate documents; it was formed in record time, and does not appear to play a role in the Venezuelan domestic banking system.

What about Mazaheri ? It is reported that the German customs officials did not arrest him. He does face a $1.4m  fine, but it is understood that he is now back in Iran. And the infamous cheque, reportedly signed, in Iran, by a yet-unnamed director of the government-owned Bank of Venezuela; who was the payee, and why won't German officials release a copy ? Far too many unanswered questions for Germany. They can do better than that.
Posted by Kenneth Rijock at Friday, February 15, 2013