IS CHAVEZ DEAD, AND CUBA IS COVERING IT UP, LEST THEY LOSE ALL THAT FREE OIL ?

Assuming that you saw the recent "news article" out of Cuba, claiming that recovering Venezuelan President Hugo Chavez cannot speak to his people, because he has lost his voice, due to the medical procedures performed on him, let me take it one step further. Multiple sources from inside Cuba are claiming that Sr. Chavez is indeed deceased; both Cuba and Venezuela, wishing to avoid the consequences of the death of a dictator, have continually lied to the world about his condition. I have come to expect no less from both governments.

(1) All of Chavez' family have left Venezuela; some are known to be in Cuba, whilst others have relocated to Russia. His brother, Adan Chavez, has also left the country, and moved all his wealth. Their flight would support the fact that Chavez' death has already occurred.

(2) All of Chavez' personal wealth, that he had on hand in Venezuela, has been transferred out of the country; some is known to be in Russia. There is definite proof of this capital movement. Chavez has large existing accounts in Switzerland, as we have previously reported, but there is no current information on the status of these accounts.

(3) High-level government officials are also known to have already moved their wealth overseas. Some has been placed in accounts located in the Republic of Panama.

(4) As we previously reported, senior officers at the Central Bank of Venezuela are transferring funds out of the country. There does not appear to be any control on these massive funds transfers.

Will the next Venezuelan government honour financial obligations incurred by President Chavez, or will it renege on its debts, particularly to its supporters, notably China and Iran ? Whatever happens, now is the time, if you are a banker concerned with Country Risk, to reduce your financial exposure to: 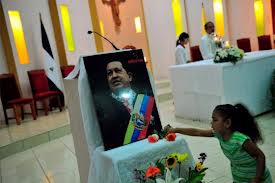