My story on the 300m Bolivar cheque*, seized by German Customs authorities from a powerful Iranian PEP, purportedly working for Kayson Company in Venezuela, has spawned a  number of comments on the company's other suspected money laundering activities for Iran. As the result, I have a lot of questions about the company's money laundering, and also about Iranian oil sales through Belarus: 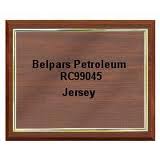 (1) According to a little bird in the Channel Islands, Kayson is the majority shareholder of a Jersey company called Belpars Petroleum Company Ltd., which ostensibly operates in Belarus. The problem is that public sources state that the National Iranian Oil Company, and/or PetroIran Development company own that 51%. Is the Kayson ownership concealed from public view, because Belpars is laundering Iranian funds, or assisting in international sanctions evasion, or both ? Where are the usually efficient Jersey regulators on this obvious sanctions evasion ?

(2) Is the €200m Kayson-funded Belpars construction of a hotel, known as the Magnet Minsk, providing cover for the sale of Iranian oil through Belarus ? One public source mentioned a €500m cash injection into Belpars by Kayson. Where are all these Euros coming from, I wonder ?


(3) Why is Esfandiar Rahim Mashael linked to both companies ? He is the influential Chief of Staff to Ahmadinejad, and could be Iran's next president, according to Iranian expats who have identified him in connection with Kayson.

(4) Just how much is Belarus aiding and abetting Iran, assisting it in sanctions evasion, and money laundering ?

(5) Exactly how does Kayson Company, SA,  the Venezuelan subsidiary, figure in the sanctions evasion activity ?