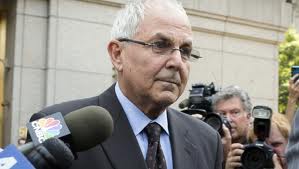 Bernard Madoff's Chief Compliance Officer, brother Peter Madoff, has begun serving his 10-year sentence, for his role in the massive Ponzi scheme. Under the current Federal rules regarding Good time, also known as Gain Time, he will be required to service 85% of his sentence. Compliance officers   who have the smallest suspicion about their workplace would do well to remember that, should they indulgence in willful blindness, they could end up in Federal Prison for an extended period, like Mr. Madoff.

The victims of the fraud, particularly those who had sustained large financial losses, were incensed when they learnt that Madoff's family and clergy had succeeded in obtaining a delay in his December surrender date, so that he could attend a religious ceremony, which was followed by a lavish party for a family member.

Madoff is currently incarcerated in the minimum security satellite camp at the Federal Prison in Estill, South Carolina. The Federal Bureau of Prisons, which has sole discretion in placement, disregarded the Court's request to send him to a facility in upstate New York.  Madoff is 67 years old.