Our recent article, Arrested BVI Premier seeks to Mitigate his Sentence by  Cooperating against Other Corrupt East Caribbean Leaders (May 3, 2022), appears to have created shock and awe amongst the capitals of the East Caribbean states. The number of readers, many of whom have never been known to access this blog before, as well as the adoption of the content by news websites in the region, verifies information that we have received regarding anxiety and even fear in the capitals of Caribbean countries.

The largest amount of interest in the story has come from Dominica and and Antigua; we understand the concern from the Commonwealth, as its Prime Minister, Roosevelt Skerrit is a known associate of the arrested BVI premier, Andrew Fahie, but we are puzzled as to why readers in Antigua appear to be obsessed with repeatedly reviewing the information contained in the article. While we are unaware of the extent of the relationship between Fahie and Antigua PM Gaston Browne we will now be focusing our attention upon such connection, in addition to our present investigation of PM Skerrit's longtime known  friendship with Fahie. 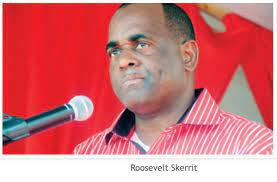 Efforts to discredit this blog, and its author, have increased exponentially since the article was published, as well as unsuccessful attempts at hacking it. The largest amount of activity appears to be coming from Dominica, which reinforces and confirms our information that the primary target of PM Fahie's intent to cooperate against is Dominica Prime Minister Roosevelt Skerrit, whose corrupt regime is currently the target of extensive peaceful protest marches by the county's voters.

Five years ago, Skerrit and members of his Cabinet, responding to allegations of money laundering and sales of diplomatic passports to international criminals made on this blog, filed a civil suit against me in Dominica, employing the usual "Shoot the Messenger" ploy, but a judge there refused to allow the case to proceed. That old case has now resurfaced in Dominica's state-controlled media, in a new effort to stifle the truth. Rest assured we shall continue to report all developments in the Miami case as they occur, notwithstanding the consequences for corrupt Caribbean leaders, who think they can operate with impunity, free from accountability.