WANTED VENEZUELAN OFFICIAL, WHO SUED WITNESS AGAINST HIM, NOW CANNOT LOCATE HIM FOR A CVIIL SUIT


His name is Pedro Luis Martin Olivares, the former Chief of Financial Intelligence at SEBIN, Venezuela's National Directorate of Intelligence and Prevention Services. He is wanted by the Drug Enforcement Administration, on charges of Conspiracy to Distribute Cocaine, and he has been sanctioned by OFAC as a Specially Designated National (SDN). According to public filings, he allegedly shut down Venezuelan government radars upon request of drug traffickers, which allowed them to exit the country with shipments of cocaine destined for the United States.

He is a fugitive from justice in the United States. So, when he arrogantly filed a civil suit in Miami, in Circuit (state) Court, for Defamation and Slander, against one of the witnesses who gave evidence against him, claiming that the testimony was false, did no US government law enforcement agency or prosecutor, seek to intervene in the case ? Obviously the suit was filed to frighten the witness, for Martin could never come into the US, to testify in the civil suit. Arguably, the suit could constitute witness intimidation, for Martin was still a fugitive, and the witness might be too scared for his safety to appear at Martin's future trial. 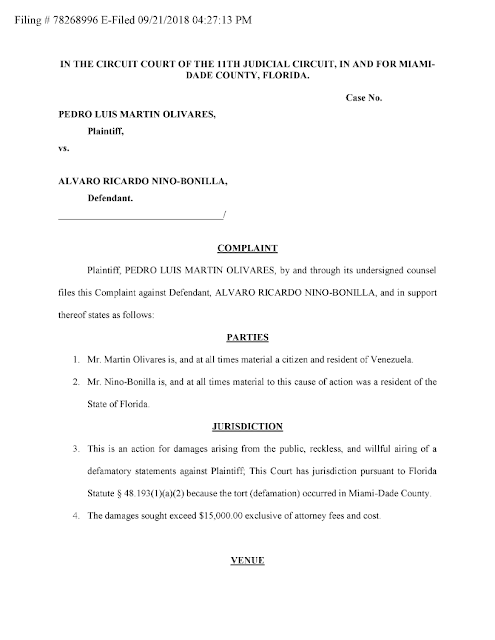 There is what might be considered a happy ending to the civil case; Pedro Martin's attorneys have been unable to serve the witness for more than a year, and their unsuccessful efforts will most likely result in dismissal of the civil action, as the extension granted by the Court to serve the witness has now expired.That still doesn't explain how a Federal fugitive, who is a senior official in the Maduro regime in Venezuela, can access our court system, without any response from those in our law enforcement community who were responsible for his indictment. The civil case actually made the Miami newspaper. Are they saying that they didn't see it ?