Public discontent in the Commonwealth of Dominica boiled over this week, after estimates of the total amount of Citizenship by Investment (CBI) payments illegally diverted into the pockets of corrupt government leaders increase to $1.2bn. Local media is saturated with grievances by the public, demanding to know where all the CBI money went, and who received it.

Government attempts at disinformation, by securing a  favorable audit report, conducted by Pricewaterhouse Coopers (PwC), have been discounted, especially after it was revealed that a CBI consultancy,  CS Global Partners, commissioned the study. CS Global is reportedly a major provider of CBI applicants for Dominica.

Opposition leaders in Dominica have asserted that information regarding diverted CBI payments was concealed from PwC. Readers who wish to review the 22-page report, entitled Assessment of the Commonwealth of Dominica's Citizenship by Investment Programme, may access the complete text here. 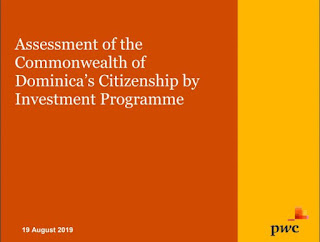 Unfortunately, the total lack of of any government internal oversight in Dominica means that there will not be any meaningful investigation or inquiry into the financial affairs of senior government officials, elected or appointed. It should be noted, however, that pending investigations in North America, conducted by law enforcement agencies of the United States and Canada, into real estate investments placed with laundered money by corrupt Eastern Caribbean leaders, may provide justice for the people of Dominica.
Posted by Kenneth Rijock at Thursday, August 22, 2019