IS IRAN TELLING THE TRUTH ABOUT THE DESTINATION OF THE IRANIAN OIL TANKER ? 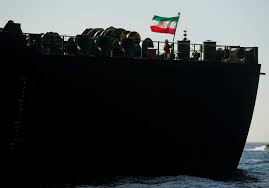 Where on earth is the IRGC-controlled crude oil tanker Grace I (disregard Iran's name and flag change, please) going to dock and unload its sanction cargo ? When it was freed by Gibraltarian authorities, after Iran swore that it would not travel to its original destination of Syria. it was ostensibly headed to a port in Greece, notwithstanding US warnings of the consequences awaiting whoever offers the tanker safe harbor for unloading. Then, Greece said there was no agreement to accept the illicit oil, acceptance of which violates EU law.

Next, it was said to be headed for a port in Turkey, although that harbor could not accept an oil tanker of that size and draft. Then, Turkish authorities denied that it had been accepted to dock in Turkey. A subsequent story stated that the cargo had been purchased, bit no details were furnished.

Now, it seems that there is a problem with the truth; Turkey says its now going to Lebanon, but Lebanese authorities demur, and since Lebanon has neither a crude oil refinery, nor a history of buying crude, it most likely will not be dropping anchor there.

So where is this oil actually going ? The only place left is the pro-Iran government of Syria, the initial, albeit illegal and sanctioned, destination. Perhaps it was intended to end up there in any event, the smoke and mirrors of disinformation notwithstanding. If it ties up in Syria, it will be one more time that Iran's guarantees and representations are not to be trusted.
Posted by Kenneth Rijock at Friday, August 30, 2019