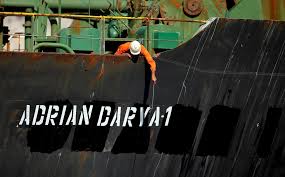 Maritime information sources are now asserting that the Grace 1,  now renamed the Adrian Darya 1,  and flying the Iranian, and no longer St Kitts, flag, is now headed for the port of Mersin*, in Turkey. The vessel, loaded with Iranian crude, and believed to be under the control of the Islamic Revolutionary Guards Corps (IRGC),  was originally said to be bound for Greece. Greece is a Member of the EU, and therefore subject to its sanctions against Iran; Turkey, although it has attempted to acquire EU membership for years, is not.

The vessel was detained by Gibraltarian law enforcement, with the assistance of the British Royal marines, when it entered territorial waters, en route to a Syrian refinery owned by a sanctioned entity. The United States unsuccessfully sought to seize the crude oil tanker, due to the fact that it was under IRGC control. The IRGC was sanctioned by OFAC in 2017,  for providing material support to designated terrorist organization.