THE FARC RETURNS TO THE BATTLEFIELD IN COLOMBIA; EXPECT INCREASED MONEY LAUNDERING THROUGH PANAMA 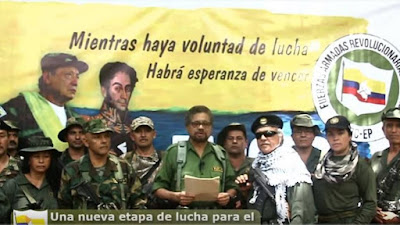 Major elements of the Revolutionary Armed Forces of Colombia - Peoples' Army, more commonly known as the FARC, a Marxist-Leninist movement  formed by the Communist Party of Colombia in 1964 to bring down the country's government through armed conflict, and which made its peace in a treaty back in 2016, have dissolved the agreement, and called for a return to armed struggle against the government of the Republic of Colombia. A video calling for FARC members to return to the jungle to renew their armed action has been widely distributed.

The President of Colombia, Iván Duque, has called for the issuance of arrest warrants of the FARC leaders who made the announcement, and offered a reward of three million Colombian Pesos for information leading to their arrest ( $873,000).

Given the FARCs long history of extortion, narcotics trafficking, and kidnapping, compliance officers at international banks located in North America and in Western Europe, and knowing that the FARC typically uses the facilities of a number of Panama's "don't ask, don't tell"  money laundering banks, expect to see an increase in suspicious transactions originating in Panama. The FARC will soon be fully engaged in its criminal enterprises, to raise funds for its renewed military operations, and the excess will be placed and laundered overseas, as it always has been. Watch for it.
Posted by Kenneth Rijock at Saturday, August 31, 2019