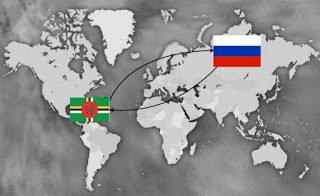 In a truly puzzling turn of events, the Government of the Russian Federation last week passed legislation allowing holders of passports from the Commonwealth of Dominica to visit visa-free Dominica recently posted an ambassador to Moscow, reportedly full-time. although he is the head of a CBI consultancy selling Dominica economic passports, and there is no address for an Embassy of Dominica listed anywhere, including on Dominica's diplomatic and consular office website.

Given that Domnica is still  engaged in a long and difficut journey back from last year's hurricane damage, it is unlikely that any of its residents will be able to vacation in Moscow; also they simply cannot afford it, as the country's economy is moribund. The individuals who can travel there are the holders of Citizenship by Investment (CBI) passports, as well as those who bought diplomatic passports from government officials. Considering that many of those are Iranian, Syrian and Chinese nationals, their new passports enable them entry without any engthy visa application process.

Also, considering that a large number of Dominica CBI passport holders have subsequently been arrested, on various criminal charges, those who are career criminalsm abd who haven't been arrested yet, now have a safe haven in which to escape the long arm of international justice. It is certainly a subtle invitation to them to move their criminal operations to Russia, to network there, or to affiliate themselves with Russian organized crime, which operates as a state-sponsored operation that is mutually beneficial to the Russian leadership.

It is reasonable to expect that the visa waiver is an open invitation to participate in illicit activities; what it does is further raise risk levels upon the holders of Dominica passports, should they show up at your bank, seeking to open account relationships. Are they opening their accounts with Russian flight capital of organized crime groups, or to further some Russian political goal ? Whoever they are, regard them as unwelcome at your legitimate financial institution.
Posted by Kenneth Rijock at Sunday, September 02, 2018