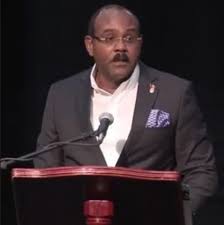 Readers who wondered what was in the letter an American official delivered to Antigua & Barbuda PM Gaston Browne, at the United Nations General Assembly meeting this week need puzzle no more. Insiders in Antigua report that it contained a direct threat to sever Antigua's financial institutions from the American financial structure, meaning close out all correspondent relationships, and disconnect Antigua from the Federal Reserve System, thereby blocking all access, due to rampant official misconduct. This may explain the immediate, and very pubic, arrest of former government official Leroy King, on a 2010 extradition warrant that Antigua had previously intentionally evaded, through a variety of dilatory legal maneuvers.

King's attorney, David Dorsett, has reportedly filed yet another bogus Constitutional appeal of the extradition order, and claimed that his client cannot be extradited while the appeal is pending, in another in a long list of frivolous actions. Dorsett, it is important to note, is also fighting the extradition of another of his high-profile criminal clients, the Indian fugitive Mehul Choksi, whose case has also been reported extensively on this blog. Dorsett claims that Choksi is innocent of the charges pending against him in India, where he is the Most Wanted financial criminal, due to losses in the billions of dollars.


Corrrupt Antiguan government officials, who have long boasted that the United States would take no action against their nation, are now reportedly fearful that more direct American Government actions, of a financial nature, will be taken against their country for its lack of cooperation in international matters, including extradition, transparency in its CBI and diplomatic passport issuances, and close relationship with known fraudsters and career criminals.

Antigua's fragile tourist industry is totally dependent upon the regular arrival of US and Canadian citizens via commercial aviation, and that could be the next target of an Uncle Sam who is quite unhappy with how Antigua is being governed. Look for some additional American government actions, unless Antigua institutes much needed reforms.
Posted by Kenneth Rijock at Saturday, September 29, 2018