ANTIGUA AND DOMINICA EXCLUDED FROM US VISA RENEWAL WAIVER PROGRAM 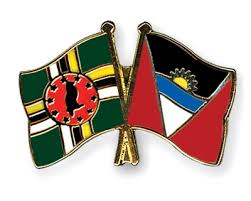 The US State Department includes  Grenada, St Kitts & Nevis, and St Lucia in the US visa renewal waiver program, which allows visa holders from those countries to renew without requiring their physical presence at the US Embassy in Barbados, which is a great convenience and cost savings.

Antigua & Barbuda and the Commonwealth of  Dominica have been pointedly excluded from this program, and the question has arisen as to the reason these countries have been omitted. A number of politicians from both Antigua and Dominica have rendered the opinion that their nations have been excluded is their pro-Venezuela voting record at the Organization of American States (OAS). There is no factual basis for their claim, and it is strictly their opinion and theory.

Veteran observers of the Caribbean scene dismiss the OAS grounds as political noise, intended to divert attention from the real problems, and assert that there are multiple negative issues that were factors in the American decision:

(1) The failure of both countries to render international cooperation in extradition matters: for Antigua, look at Leroy King and Mehul Choksil for Dominica, look at Alireza Monfared.

(2) The crime of selling, for millions of dollars, diplomatic passports, to dodgy clients, that fail to conform to United Nations requirements, and are used by white-collar criminals to evade customs agents, and smuggle illicit wealth.
(3) Court systems that fail to fillow the Rule of Law, and do the bidding of senior government figures.
(4) Using paramilitary police and army units to attack peaceful protesters in the street.
(5) Filing bogus, meritless civil suits, to attack Opposition leaders, whistle blowers, and journalists who are against the government currently in power.
(6) Paying voters to reelect the party in power; flying in expat voters to add even more captive votes in all national elections.

We could go on and on with additional factors most likely considered by the United States, when it decided to exclude Antigua & Dominica, but the above list demonstrates that these two nations are sorely in need of reform, on many fronts.