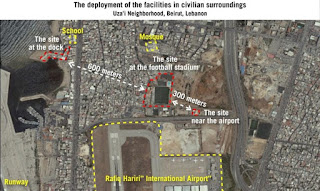 These photos, taken above Beirut-Rafik Harriri International Airport, confirm that Hezbollah, with Iranian technical assistance, has placed underground precision missile production facilities adjacent to the active runway. The purpose of these sites is to upgrade Hezbollah's existing arsenal of Iranian missiles, to give them precision-guidance systems for greater accuracy. Similar factories have been constructed at the Port of Beirut, which is represented by the photographs at the bottom of this article.

The significance of these facilities is that they have beern deemed a clear and presentr danger by the State of Israel. Whether they are attacked during a period of what passes for peace in Lebanon, or during an expected Third Lebanon War, the generals at the IDF have warned that the next conflict will affect the entire country of Lebanon, not just the Shi'ite-dominated South. They intend to reduce the country's infrastructure to ruins, due to Lebanese de facto alliance with Hezbollah. 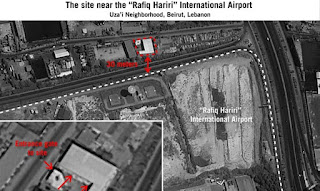 This means that the Beirut financial center will most likely not survive any future fill-scsle war between Hezbollah and Israel, at least in the firm we know it now. The brick-and-mortar bank facilities, suspected of facilitating terrorist financing, will be targeted and destroyed. Online banking may be the only asset to survive the conflict, but whether wealthy Middle Eastern businessmen will continue to have faith in their Beirut banks and bankers is doubtful.

Those of you who remember Lebanon's Civil War, 1975-1990, know that rebuilding the downtown district took years. it now appears that Lebanon's love affair with Hezbollah will, eventually, repeat that nightmare, and destroy the last remaining significant asset Lebanon has, its banks. So long as Hezbollah threatens Israel's existence, expect that any future conflict will result in the loss of Beirut's banks. 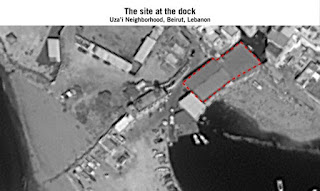