The special visa program, administered by the Province of Quebec, known as the Quebec Immigrant Investor Program, or QIIP, is fatally flawed, due to the fact that program administrators either failed to conduct effective due diligence upon its mainly Iranian and Chinese appplicants or were pressured into ignoring red flags clearly indicating that their investment "capital" were the proceeds of crime or corruption. Two-thirds of the approved applicants were from Mainland China, the rest were Iranians or wealthy Arabs who could not document the source of their wealth.

Apparently, the program, Investment Quebec, was largely operated through overseas offices, including one in Hong Kong that was understaffed and overworked, and thus able to conduct only minimal efforts to complete due diligence, resulting in a failed product that never truly confirmed applicants' employment or source of funds. Former staff members have stated that they were under orders to approve applicants, due to Provincial financial goals.

Although the stated intention was to have the QIIP applicants reside in Quebec, once they arrived in Canada, they were free to relocate elsewhere; 85% currently live in Ontario and British Columbia.

To add to the problem, some Canada-based independent consultant firms "augmented" the information contained in their clients' applications, to insure that they passed scrutiny, and assisted with the movement of dirty cash into Canada, whose banks are notorious for ignoring the signs of illicit wealth. A number of Canadian consultancies that placed clients under QIIP are reportedly under criminal investigation by the authorities.

Did the QIIP program allow criminal elements to relocate to Canada, and launder their illicit assets in the process ? Most immigration consultants consider it to be a failure, though Investment Quebec deem it a success, due to the influx of capital into the province. We cannot share that conclusion, and fear that Quebec's new "residents," who can file for citizenship after only a few short years, may represent a hidden danger to Canada, and cast a dark cloud upon its future. 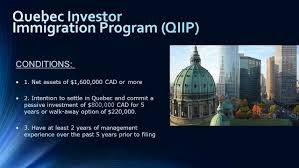