Peaceful protestors in front of Dominica's High Court, where leading Opposition figures face a trial tomorrow on trumped-up charges that they engineered a failed coup d'etat in 2017, face off against Dominica's paramilitary police, in camouflage fatigues, complete with assault rifles and Chinese armored cars. Opposition leaders, including Lennox Linton and Joshua Francis, were required to report to Magistrate's Court, in advance of tomorrow's trial. 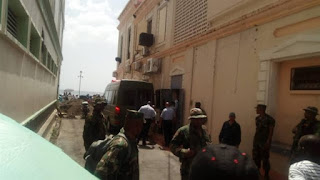 Sources inside Dominica's legal community have reported that attorneys from Trinidad and Tobago were summoned to Roseau by Government, and secretly sworn in, to allow them to conduct a criminal prosecution that most legal experts claim is politically motivated,  brought solely for the purpose of removing Opposition leaders' voices from the ongoing conversation about rampant govermental corruption in Dominica, by imprisoning them on bogus charges. There was no effort to overthrow the government. 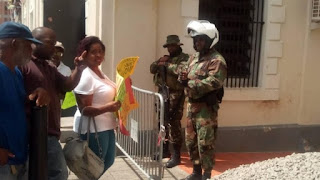 Dominicans are also outraged that the Government is seeking to pass legislation, on a fast-track basis, which will essentially eliminate Freedom of Speech, of Peaceful Assembly, and of Association, and massive protests are expected tomorrow, when the trial commences. 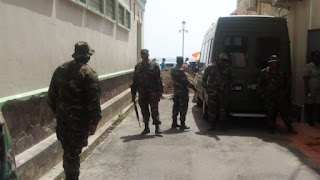